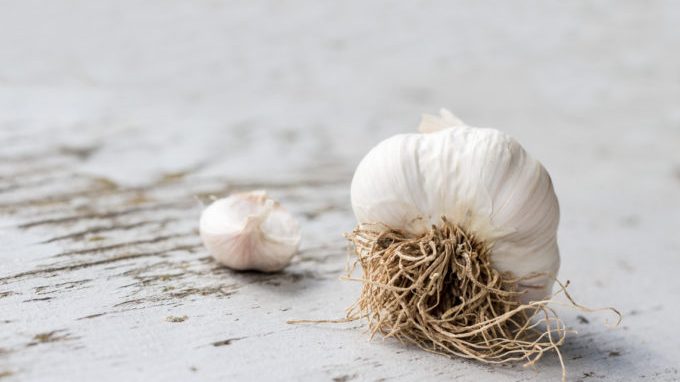 Garlic does wonders for the human body in many ways. In fact, Garlic has been used medicinally for at least 3,000 years, but until relatively recently its benefits were considered little more than folklore. But it’s becoming more and more accepted that it works wonders for health.

There has been some bad press about Garlic being bleached by unscrupulous International sources, so if you want to be sure your garlic is from a local source, make sure the roots are still attached to the bottom of the bulb. Imported garlic must have the roots removed before it comes into the country.

Garlic is one of the oldest known medicinal plants, and it’s been credited with fighting heart disease, lowering blood pressure and helping to fight off colds.

Modern research on garlic has found that it is effective to lower cholesterol and blood pressure as well as offer protection against strokes and heart disease.

It has been said, “If garlic had been created in the laboratory instead of by nature, it would probably be a high-priced prescription drug.”

The following is a more detailed account of what Garlic and the Allicin in Garlic does for various organs in the human body:

Delicious way to get healthy

Today, there is increasing scientific evidence to support the many health benefits of eating Garlic daily. Extensive tests on humans have concluded that eating Garlic regularly can:

Tips for cooking with garlic:

Before cooking, remove the skin of the clove. There are many ways to make this easy:

After skinning the garlic, choose a cooking method that will enhance the flavor. It can be

Garlic is very sensitive to heat and will burn easily, especially when sautéing. Expose the garlic to heat just until the oil sizzles and then remove it. When cooking garlic with onions, start the onions first. They will take longer to cook.

The first scientific report to study garlic and cancer was performed in the 1950s. Scientists injected Allicin, an active ingredient from garlic, into mice suffering from cancer. The mice receiving the injection survived more than 6 months whereas those which did not receive the injection only survived 2 months.

Dr. Lou reported in his book, “Garlic for Health,” that he and his students were testing various drugs for their anti-microbial activity. He stated:

Upon returning to my laboratory, I prepared diluted garlic extract, introduced it to several of the cultures, and stuck them in the incubator overnight. The next day I was astounded to find that the diluted garlic extract did indeed stop the growth of those cultures, more effectively, in fact, than some of the potent drugs we were testing at the time.

A medical student working with Dr. Lou reported that the HIV virus did not grow well in the presence of garlic in tissue cultures. Garlic has been reported in several studies effective against several forms of cancer. The antimicrobial spectrum of garlic by in vivo and in vitro studies include Herpes, Cryptocci, Candida, Histoplasma, Mycobacteria, Salmonella, and Entamoeba. Garlic has increased platelet counts in some studies.

Mark Abbruzzese, M.D. of Washington, recently tested fresh raw garlic in his lab against various pathogens like Tuberculosis and various strains of yeast and found that raw garlic killed them all. The same anti-bacterial effects were not found from over the counter garlic pills.